And Then There Was Three...

Even as the Democratic field of Presidential candidates is narrowing, the Republican field is growing.  There are now three declared candidates in the Republicans who will challenge the incumbent Donald Trump.

Former Gov. Mark Sanford of South Carolina said on Sunday that he would challenge President Trump for the Republican presidential nomination, criticizing Mr. Trump’s stewardship of government spending and the global economy and questioning the financial ethics of his administration. - NY TIMES

Besides Sanford, two other challengers to Trump have also announced that they will be running.


Sanford is now the third Republican to announce a run against Trump in the primaries, with former Massachusetts Gov. Bill Weld and former Illinois Rep. Joe Walsh previously announcing their campaigns. - FOX News

In the meantime, Republican officials in four states, including Sanford's own South Carolina announced they were canceling the primaries or caucuses in their states.


Republican parties in South Carolina, Nevada, Arizona, and Kansas are expected to finalize the cancellations in meetings this weekend, according to three GOP officials who are familiar with the plans. - POLITICO


In the same Politico article, Walsh said in response to the news,


“Trump and his allies and the Republican National Committee are doing whatever they can do to eliminate primaries in certain states and make it very difficult for primary challengers to get on the ballot in a number of states,” said former Rep. Joe Walsh (R-Ill.), who recently launched his primary campaign against the president. “It’s wrong, the RNC should be ashamed of itself, and I think it does show that Trump is afraid of a serious primary challenge because he knows his support is very soft.”


Weld, on the other hand, tweeted his thoughts,


"Donald Trump, by turns arrogant and paranoid, has made no secret of the fact that he wishes to be crowned as president rather than elected. That might be fine in a monarchy, but we overthrew ours two centuries ago."


By cancelling the presidential primaries and caucuses, it gives the illusion that Trump is cheating to win those states. He's been declared the winner, withought any campaigning being allowed to happen.

For their part, the GOP leaders in those states cite the cost of running the presidential caucuses and primaries.  In Kansas, leaders say the caucuses would cost about $250,000.  Nevada leaders said it would be a waste of money, knowing that Trump would win the primary anyway.  Money that leaders in both states say would be better used to assist in other 2020 contests.
Posted by Kevin Surbaugh at 6:28 AM No comments:

Email ThisBlogThis!Share to TwitterShare to FacebookShare to Pinterest
Labels: News

Abilene, KS - With a population of 6,380 the city of Abilene is a small town in North Central Kansas.
There is no college in the town Yet it has a lot to offer.  Most notably it was the boyhood home of our 34th President Dwight D. "Ike" Eisenhower.  It is also the home of the Presidential Library and Museum of the only President to have grown up in Kansas.
The Eisenhower Center is the home of five buildings.
1) The Visitor Center, which houses the gift shop and is where you enter, to purchase your tickets (Currently tickets are $12 for the museum and $8 for the boyhood home).
2) The chapel, which houses the graves of the former President and the First Lady.
3) The Library, which like other Presidential Libraries is a full research library.
4) The boyhood home of the president.  It is the actual home and sits on the original site of the home.  The home where he, his other five brothers, one sister and parents all lived as he grew up.
5) The fifth building is home of the museum itself.
When we arrived in Abilene, we were able to secure a coupon, allowing us into the Eisenhower Museum, for half price.  Well to be more precise, it was a buy one get one (BOGO) offer, but the effect is the same.  Ticket prices for the museum are $12 each and for the home, they are $8 each.  For both that is a total of $20.  We chose to see both and the coupon got us tickets for both the museum and the house for the price of just one of us.   The receipt served as our tickets for the museum, but the house had actual tickets for a specific time to go through the house with a tour guide.  The house was our first stop after leaving the visitor center.  The tour was interesting, even though it was my second time at the museum, it was my wife's first visit.  The tour guide was able to provide useful information, that even I hadn't learned or remembered about the only President from Kansas. The Eisenhower Family Home is the only historic home in the National Archives and Records Administration (NARA) system. Most of the presidential homes and birthplaces are operated by the National Park Service or a state agency.

After we left the Boyhood Home of the 34th President, we headed over to the museum. In the museum, we saw a lot of items from his days in the military.  The museum told his story from that of a child growing up in Kansas, after their move from Texas, through both World Wars, and into the Presidency.  I must say the museum was very fascinating.  The exhibits were well laid out.  For me, the presidential years were the most interesting, but my love for World War II history had me enthralled by those exhibits as well.  Like General Eisenhower's car in the photo on the right of this paragraph.

Finally, when we left the museum, we made a stop by the chapel to complete our trip.  Also known as the Place of Meditation, it is the final resting place of President Dwight David Eisenhower, his wife Mamie Doud and their fist born son Doud Dwight.  Doud who was three, when he died in 1921, was originally buried in Denver, thirty-two years before President Eisenhower took the oath of office for the Presidency.  In this memorial chapel, you can see the two graves and three markers for the presidential couple and their firstborn child.


We did not visit the library portion of the complex. If we were on a research trip, we would have visited this portion of the center, where the papers of the thirty-fourth president of the United States are housed.

Posted by Kevin Surbaugh at 9:37 AM No comments:

This year former Massachusetts Governor Bill Weld announced he was running for President in the Republican primary against President Donald Trump. He may not be alone. Former Ohio Governor John Kasich is reportedly considering running as well. The last time an incumbent President was challenged by someone from within his own party, was 1992.  That was when former Nixon and Reagan aide Pat Buchannan challenged President George H. W. Bush.
Since 1916, when the presidential primary system began there has only been a few times an incumbent has been challenged.  Historically speaking, no President has won re-election, even if he successfully fends off a challenger in the primary, he loses in the November general election. There has, however, been one time when this rule didn't hold true.  In 1940, incumbent Democratic President Franklin D. Roosevelt. was challenged by his vice-president.  Consequently, the vice-president was replaced at the convention.  Below we will look at each of those primaries. 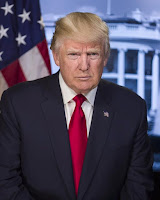 The Republican primary has yet to begin, but already there has been a candidate declare himself as a candidate in the GOP primary. That challenger, former Massachusetts Governor Weld, which some are saying that Weld won't be a serious challenge.  The fact is they don't know, but they are saying this because of a claim that no serious primary challenge has been overcome by the incumbent.  In other words, they are saying that President Trump will easily win in the 2020 General election.  While I have my own personal view regarding the election, I am staying neutral, in my writing.  In short, I am taking a wait and see attitude.  Though, I do think it will be a fascinating election to watch. Will the Republicans retain the White House, or will the Democrats regain control?  Who will the president be, come 2021? 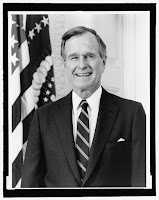 George H. W. Bush, was the President this year. Considered by some as a third term, to former President Reagan's presidency. His challenger former Nixon aide Pat Buchannon. Buchannon never won a single primary but drew enough descent that the father of a future two-term President, lost his reelection bid to Bill Clinton.

Jimmy Carter had been elected President four years earlier against the nations only unelected President. He was relatively unknown when he was elected. In 1980, however, he was unpopular and he was challenged by Ted Kennedy. Kennedy the brother of the late President John Kennedy and presidential candidate Robert Kennedy, ended up losing to Carter in the primary. However, Carter lost to former California Governor Ronald Reagan.

1976 - Future President Falls to the Incumbent 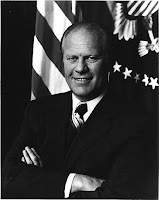 The 1976 Republican primary saw Ronald Reagan come very close to denying renomination to Gerald Ford.  President Ford had been appointed as vice-president after the resignation of Spiro Agnew, then ascended to the presidency when Richard Nixon resigned in 1974. Ford went on to lose narrowly to Jimmy Carter in the general election, and Reagan succeeded Carter four years later. 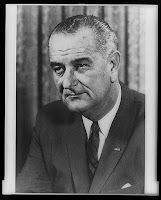 This is one I debated with myself, whether to actually include. Even though it is included in my research on the topic, the President actually withdrew from campaigning and was replaced by his Vice-President.
That year, Minnesota senator Eugene McCarthy held Lyndon Johnson to a surprisingly narrow victory in New Hampshire; with polls showing McCarthy would likely defeat Johnson in the next major primary in Wisconsin, and with LBJ focused on the Vietnam War’s damage to his legacy, he folded his tent. With his withdrawal, and the assassination of Robert Kennedy his Vice-President Hubert Humphrey jumped in the race and won the Democratic nomination, but the Democrats lost the White House. 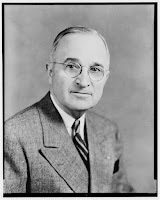 In 1952, Harry Truman was running for reelection, Tennessee senator Estes Kefauver beat Truman in the New Hampshire primary which, lead to Truman deciding not to continue to seek a full term.


1940 - the President versus the Vice-President 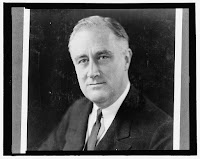 The 1940 Democratic Presidential primaries saw incumbent President Franklin D. Roosevelt was selected, as the nominee through a series of primary elections and caucuses culminating in the 1940 Democratic National Convention held from July 15 to July 18, 1940, in Chicago, Illinois. He faced the opposition of Vice President John Garner in the primaries. Garner lost the primaries and during the convention was excluded from vice-presidential nomination in favor of Henry Wallace.

Posted by Kevin Surbaugh at 3:09 AM No comments:


Who would you vote for?

If the election was today who would you vote for?
Posted by Kevin Surbaugh at 6:42 PM No comments:


There are currently thirteen (13) Presidential Libraries in the National Archives System. Although the fourteenth one is planned.

In addition to the official list above, there are a number of other museums and libraries for the 45 Presidents:

The Presidents by Party

There have been 45 Presidents to date. Below is a chart that list the Presidents by party.
From that we can see, that even though the Democrats have been in existance longer, the Republicans have had more Presidents.


Posted by Kevin Surbaugh at 7:01 PM No comments: